I went to Christian music festival this weekend and it made me realize how often it is often harder for me to be a Christian with Christians than it is when I with other people. Specifically I what comes to mind is one man at the festival that was giving away christian bumper stickers. Some of them were the more typical stickers we’re all probably used to seeing, stuff like “got Jesus?” “body piercing saved my life” “it’s not a religion it’s a relationship” “real men love Jesus” and so on. Those ones didn’t really bother me. But what really irritated me is when I saw a few like  “premarital sex puts you in the used car lot” “I am the Christian the liberal media hates” “abortion kills”. 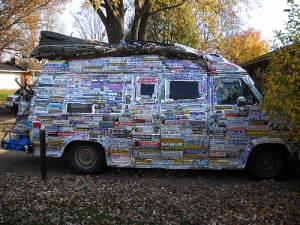 I understand that these stickers can in some way preach the word” as the guy selling them said they did but I wonder at what cost? The guy told me a few stories of how people decided not to get an abortion when they saw one of the stickers or even went back home to their families when they were on their way the strip club, so yeah he is right, it does work. Sometimes all people really need is a little nudge like that. But how many times does it have the completely opposite effect. How many girls read about premarital sex puting them in the used car lot and feel like a used car the rest of the day because of this nice ‘Christian reminder’? How many girls feel like their murderers after seeing “abortion kills” because they got an abortion and feel bad about it already? True, Mr. bumper sticker guy, sometimes it does have a good influence but I think I could wager that it usually does the opposite effect

It also sends a really mixed message, I saw two bumper stickers in particular, “when prayer was heard in schools there were no gunshots” and “prayer was heard at Columbine”. Notice a bit of inconsistency? Can you imagine how much of a joke we must seem to atheist when they see two cars pull up side by side with these stickers? I was talking with my buddy Wes about it and he made a great point. he said if Christians had been actuall Christians to Eric and Dylan none of that would have ever happened.

In the end here is the point, if your going to put up sticker on the back of your car think about all the ways it could be interpreted. But overall don’t prove your a christian by the writing on your bumper but the actions of your heart.