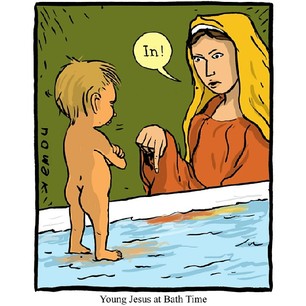 This is one of the objections I hear a lot of times against Christianity. People feel frustrated there is an any information about Jesus when he was a child. If he’s that important, you would expect to hear about his childhood. So because the Bible doesn’t talk about his childhood it must mean the Jesus never existed. There are several problems with this objection.

Second, the objection assumes that all parts of a persons life are equally important. We don’t have infomation about their childhood becase those years weren’t important. Most people know a lot about Winston Churchhil durring the war but we don’t know much about him before and after the war. Why is that? Because those years were less important. His biggest influence in the world surrounds WWII. The same is true of Jesus. The years that he left his mark on the world are his three years of ministry of which we have more information about than any other person of that time period.

Finally, the question shows also shows a lack of knowledge of what we know about other people of the time period. If our lack of records are reasons for denying Jesus as being historical, we can do the same with Socrates, Alexander the Great, or Julius Ceasar. Should we dismiss them and others as historical because we don’t know much about their childhood? Of course not.

The fact of it is we have plenty of sources acknowledging that Jesus actually existed. Even apart from Christian sources we have information about Jesus from over 5 sources: 1. Josephus, a Jewish-Roman Historian, 2.the Jewish Talmud, 3. Tacitus, a Roman Senator and historian, 4. Lucian, a satirist and rhetorician, 5. Mara Bar-Serapion, a Roman Stoic Philosopher.

In reality we have just as many sources of Jesus without including the Bible as we do of Tiberius Ceasar. Then when you add the Bible there is overwhelmingly more sources for Jesus.

So was Jesus a historical figure despite his ‘missing’ childhood? Absolutely.